Do you believe in ghosts?

How about just a good ghost story?

Either way, there are many historic hotels throughout Florida with a creepy haunted history. Read on for the spooky tales of some of Florida’s haunted hotels.

Francisco Marrero built a beautiful Victorian-style mansion in 1899 for his wife Enriquetta and their eight children. After Francisco’s death, a woman showed up to their home and declared she was Francisco’s first wife whom he’d never divorced and took over possession of the home, forcing Enriquetta and her children out on the street. Today, Marrero’s Guest Mansion is haunted by Enriquetta’s spirit. Guests have claimed to see her brushing her hair in the mirror or they’ve smelled her favorite lavender perfume.

The sounds of children playing and babies crying are also heard throughout the mansion by both guests and employees.

Enriquetta’s bedroom once occupied guest rooms 23, 17 and 18, and they’re reportedly the most haunted.

The Loews Don Cesar on St. Pete Beach is one of the most iconic hotels in Florida, known as the pink palace for its stunning Mediterranean Revival architecture in pink stucco. The luxurious resort, originally built in the 1920s, is also known for being haunted by the man who built it, Thomas Rowe and his forbidden love Lucinda. The two are often seen walking the grounds, Thomas with a white suit and Panama hat and Lucinda with her raven black hair.

In the 1940s, the property served as a VA hospital during World War II and their spirits are known to haunt the grounds.

Built in 1926, La Concha is one of Key West’s most historic hotels. Located at the center of Duval Street at six stories high, it remains the tallest building on the island today. Just be weary of ordering a glass of chardonnay while on the property. There was once a rooftop bar where the spa is now located. Rumor has it that as many as 13 people have jumped off the roof committing suicide over the years. One such soul was drinking chardonnay before leaping to his death and his ghost still lunges for the wine today. The fifth floor and elevators are also said to be haunted since one man died when he fell down the elevator shaft in the 1980s. 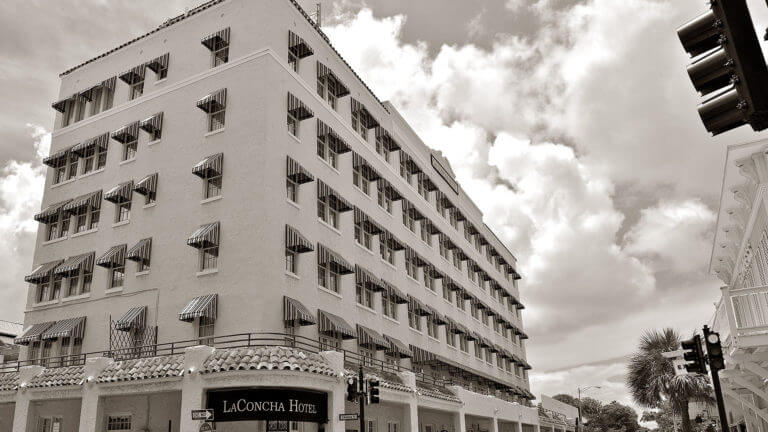 St. Augustine is the most historic city in Florida and the Casa Monica Hotel originally opened in 1887 as The Cordova. This beautiful Mediterranean Revival hotel is rumored to be haunted by many ghosts from the 1920s. The most common sighting is that late at night waltz music begins to play out of nowhere and a room full of ghosts dressed in formal attire from the Jazz Age begin waltzing in the lobby. 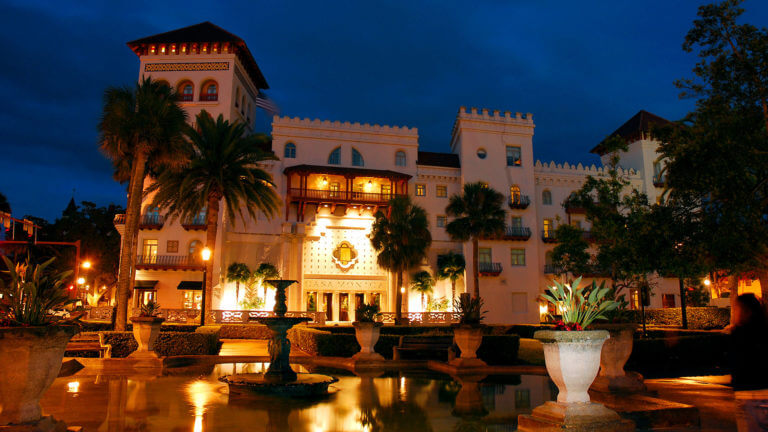 One of the creepiest ghost stories in Key West involves a doll named Robert that’s currently housed at the East Martello Towers Museum. What many people don’t know is that Robert the Doll originally lived at The Artist House in the 1890s when it was occupied by its original owners, the Ottos and their son Gene. A nurse gave Gene a doll that he named Robert after his middle name. When this nurse was fired, many strange things involving Robert the Doll began happening. Gene was haunted by nightmares, his room would be found in disarray and strange voices were heard whenever the doll was around. When Otto eventually married, his wife Anne was disturbed by his obsession with the doll and eventually went mad. People have spotted Anne’s ghost in her wedding dress on the property and guests report a generally eerie feeling at the hotel. 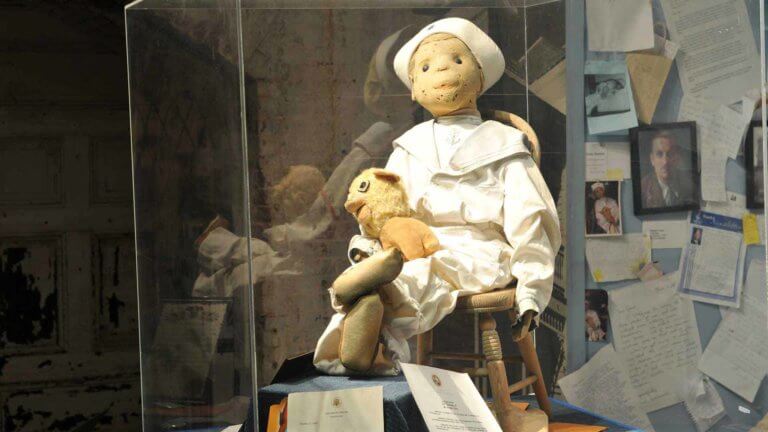 The Seven Sisters Inn in Ocala isn’t hiding the fact that their property is haunted by seven spirits who guests and employees see regularly. In fact, they consider themselves the most haunted bed and breakfast in Florida. It’s said to be haunted by its original owners Emma and Ben Rheinauer, as well as three playful children and a flirtatious spirit named George. The bed and breakfast is currently for sale, so if you’ve ever wanted to be the innkeeper of a haunted hotel, now is your chance!

The Biltmore Hotel in Coral Gables in Miami was built in 1926 and was one of Florida’s most lavish resorts for the rich and famous.

Celebrities like Ginger Rogers, Bing Crosby, Judy Garland and the Duke and Duchess of Windsor were all former guests.

During World War II the hotel was turned into a hospital for wounded vets and remained one until the 1960s. The hotel reopened in 1987 and is once again considered one of the most glamorous hotels in Miami today. However, paranormal activities occur regularly on the property. The lights will dim or turn on out of nowhere and doors will open and close without anyone there. There’s also the spirit of a woman dressed in white who’s known to haunt the guest rooms. The notorious gangster Fatty Walsh is also thought to haunt the hotel after he was murdered there in 1929.