Worldwide known as the Most Haunted House in America, it is recognized for its historical significance in Old Town San Diego. Be part of the historic legacy, mystery and legends of the Whaley Family, and hear of their myths and misconceptions. Approximately 30-minute guided tour through the historic Whaley House and the surrounding grounds. Regale in the tales of the spirits from the past and perhaps even experience the paranormal.

The Most Haunted House in America

When most folks think of San Diego, they picture gorgeous beaches, beautiful weather and cultural and artistic attractions. But for those who have an affinity for the paranormal, San Diego beckons investigation, with its rich and dark past, haunted spots, spiritual encounters and inexplicable events. The most haunted of all San Diego places is without a doubt, the Whaley House. Read on to learn more about this famous house and why it’s known as The Most Haunted House in America. 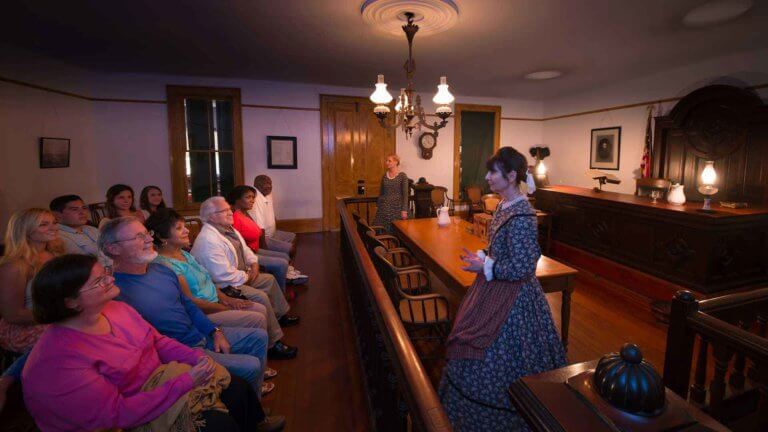 While the story of the Whaley House’s origins may seem as simple and innocent as any family history, the truth is, many believed this home was destined to be haunted before it was even built. The property was the site of one of the town’s most famous public executions – that of the hanging of the infamous thief Yankee Jim Robinson.

But Thomas Whaley was not daunted by this fact and in 1855 purchased the land and began construction of what would be his family home.

And the house, which was the first brick building in California, was a beautiful example of Greek Revival architecture. Thomas, his wife Anna and their three children moved into the house in 1857 and within a few months opened a general store inside the residence.

It wasn’t long after the Whaley family moved into the home that sadness and despair were thrust upon them. First, their young son Thomas, who was only 18 months old, died of scarlet fever inside the house.

Then, a few months later, a fire raged within the home, destroying the general store. Soon after, Thomas decided to move the family to San Francisco.

Several years later, in 1868, the Whaley Family, which now included Thomas, his wife and their five children, returned to the home.

Once the family returned, the Whaley House was again bustling with activity. It became the headquarters for the city courthouse, San Diego’s first theater troupe, a general store and more. But in 1870, local merchants began to move to the newly established New Town, which is now the Gaslamp Quarter, abandoning Old Town and leaving it eerily quiet.

Thomas Whaley was not ready to give up and continued to live in his home.

In 1871, when Thomas was away on a business trip, a group of armed men held Anna Whaley at gunpoint as they seized the courthouse records from the home. This, many say, was a turning point for the family and the house.

Several years later, two of the Whaley daughters got married inside the home. Violet, the younger of the two, married George Bertolacci and although she gave it her best effort, the marriage was unbearable, leaving Violet divorced and full of despair. She was so wrought with depression that she decided she could not live with the shame and shot herself in the chest on August 18, 1885.

Over the years many descendants of the Whaley family lived and died in the house, including Thomas, Anna and their children Lillian, Thomas, Violet and Francis. During its restoration periods, which took place several different times throughout the home’s history, workers and visitors began to notice strange and mysterious sounds, sights, aromas and encounters. The first and most well-known ghost that lingered within the house and on the grounds was that of Yankee Jim Robinson – as he had died right on the spot where the home was built.

Baby Thomas, who’d been the first in the family to pass away, had always stayed close by, as reported by many who have visited the home. They could hear tiny footsteps, the sounds of him crying, even giggling when no one was in sight.

Others report seeing a young woman lingering on the second floor of the house, believed to be poor Violet, still consumed with sorrow. She seems to stay close to the second floor where she spent much of her time after her divorce before she committed suicide. It is said that areas within the home become quite cold and her presence is felt throughout.

Thomas, Anna and several other spirits have also been felt within the home, on the stairwells and on the property. Many have seen Thomas dressed in his frock, coat and top hat standing at the top of the stairs.

Others say they could smell the aroma of French perfume, Anna’s signature scent.

Mists, lights turning on and off by themselves, crystals in the music room’s lamp swinging without any prompt – all signs that the Whaley House still belongs to the many who called it home over the years.

Although no one has lived in the house since 1953, the spirits of the dead are still there – waiting for visitors. Workers on site and guests who’ve toured the house tell accounts of many unusual and spooky encounters. Some say they’ve seen a figure looking out the upstairs window long after the house has closed for the day. Others have seen curtains moving even though all the windows in the home have been sealed shut. The sounds of children running up and down the stairs can be heard without anyone being seen. Footsteps, cold spots, the appearance and disappearance of shadows have all been seen, felt and heard by guests. Are these stories true? Come, explore and decide for yourself. 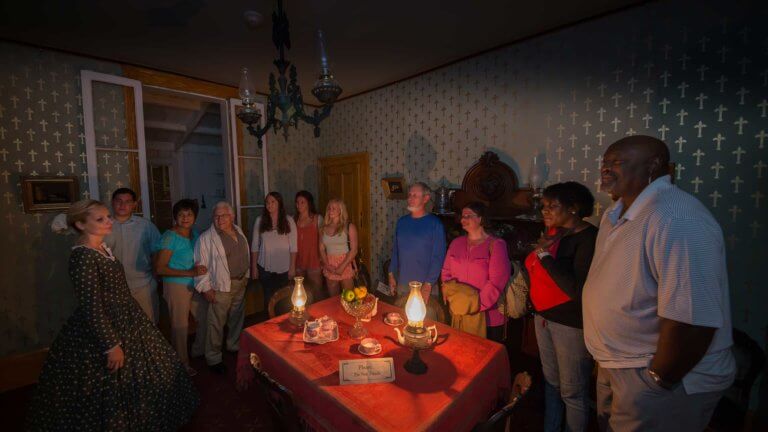