Most Haunted Urban Legends in Boston

One of the oldest cities in the United States, Boston, has seen its share of harrowing and macabre stories. These include the shocking crimes of infamous serial killers like Albert DeSalvo, nicknamed the “Boston Strangler,” and nurse “Jolly Jane” Toppan, who used morphine and atropine to snuff out the lives of patients, friends and co-workers. There are also tales of unrequited love and tragic accidents. Many believe that these historic and modern day accounts of lust, heartache, murder and revenge have created tormented and lost souls unable to find rest in the next world. As a result, spirits and apparitions haunt several historic streets, buildings and landmarks in the city. From graveyards to forts, theaters and hotels, Boston’s most haunted places feature a variety of unexplained paranormal activity.

In 1648, Margaret Jones was accused and convicted of being a witch by a Puritan court. She was taken to the “hanging place” and executed. Originally occupying a peninsula formed by the Charles, Mystic and Chelsea Rivers, the city was connected to the mainland by a thin spit of land called Boston Neck. This area contained a fortified gate and guardhouse, south of which was Gallows Hill, the hanging place. Governed by a theocracy that enforced a strict interpretation of biblical principles, the colony sent many Quakers, dissenters and individuals convicted of heresy to the gallows.

Now located under Washington Street between West Dedham and East Berkeley streets, the Boston Neck is said to be haunted by spirits seeking vengeance.

Boston Common was also a site of numerous hangings, including a dog, from an infamous elm tree. The public gathered here to watch condemned prisoners be executed on gallows during the city’s Puritan and Colonial eras. The ghosts of souls hung for violating the church’s strict doctrine are believed to haunt the first public park in America. Quakers, pirates and suspected witches have all met their fate on the Common, only to have their bodies left unburied in many cases. Their souls haunt the Common in search of justice. The most frequently reported sighting is two women dressed in early 19th-century attire, walking the pathways arm in arm or sitting on a bench talking.

Early on the morning of May 2, 1687, Joseph Beacon was awakened in Boston by what appeared to be an apparition of his brother, who was in London at the time. The spirit said he had been killed and described the events leading up to his death. Approximately a month later, Joseph Beacon received news that his brother had been killed in the manner recounted by the ghost.

An inn for pilots and ship’s captains staying overnight in Boston, the Pilot House was built in 1839 and is the backdrop for several ghosts and paranormal activity. A figure of a woman dressed in white haunts the first floor kitchen as if waiting to prepare a meal for a weary sailor. Visitors also report hearing glasses clinking, laughing and disembodied voices talking as if guests are playing a drunken card game. Doors slam shut even when no one is around.

Often listed as one of the most haunted places in the city, the Omni Parker House Hotel has seen its share of paranormal activity. During his stay in Boston in the 1800s, Charles Dickens stayed on the third floor while writing “A Christmas Carol.” Today, the elevator often stops on the floor, but no one is waiting when the doors open. The ghost of the former owner, Harvey Parker, has been seen roaming the halls and rooms on the 10th floor. Witnesses report apparitions wandering through the hotel dressed in 18th-century attire. Guests also report flickering orbs of light, eerie voices and the sound of someone rocking back and forth in a rocking chair even though no such piece of furniture is available in the hotel.

Another reputed haunted lodging is the Charlesgate Hotel; now used as a college dormitory, students report seeing the ghost of a man who committed suicide at the hotel in 1908.

Not all of Boston’s ghostly tales come from colonial times. The benevolent spirit of playwright Eugene O’Neill is said to haunt the fourth floor of Shelton Hall, a Boston University dormitory. Once a Sheraton Hotel, the Nobel and Pulitzer Prize-winning playwright spent his last years here and died in room 401. Stories of baffling happenings include the elevator stopping on the floor, which is known as the “Writer’s Corridor.” This is reported to occur even though no call button is pushed. The lights are also said to be dimmer than on other floors.

The third oldest cemetery in Boston, Granary Park Burying Ground, was established in 1660. It is the final resting place of Samuel Adams, John Hancock and Paul Revere, whose spirit is said to linger in the cemetery. It has also been reported that the apparition has appeared on horseback as if still sending the famous alarm to awaiting Minutemen.

Walk through the imposing gates, down the winding narrow paths and feel the eerie foreboding that a shadowy figure is lurking over your shoulder.

Experience a chilling sensation when viewing the graves of the five victims of the Boston Massacre. This ancient burying ground is home to numerous apparitions of lost souls. 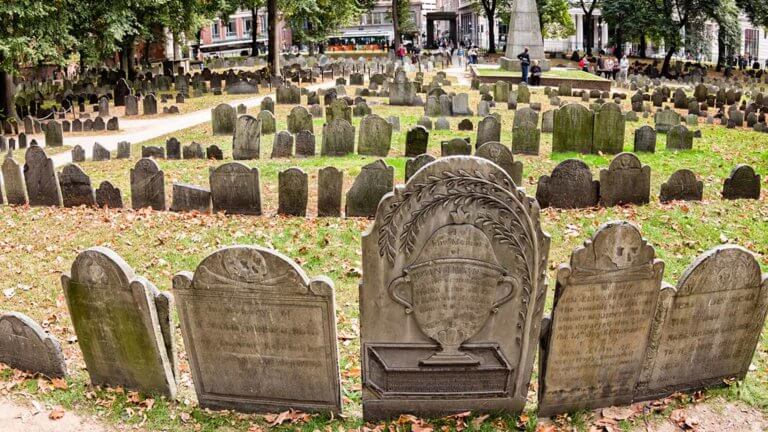 Containing the graves of Puritan leaders John Winthrop and John Cotton, King’s Chapel Burying Ground is said to be the setting where several people, thought to be dead, were buried alive by accident. As a result, their ghosts haunt the cemetery seeking retribution for a life not fully lived. Around the turn of the 19th century, gravestones were moved to form orderly rows and some markers were attached to the exterior wall. The act has inspired some people to say that confused spirits now roam the burying ground in search of their gravesites. The Gothic gravestone of Elizabeth Pain inspired Nathaniel Hawthorne to pen “The Scarlet Letter.” Pain’s ghost is said to haunt the graveyard seeking to clear her name, as many confuse her with fabled Hester Prynne. 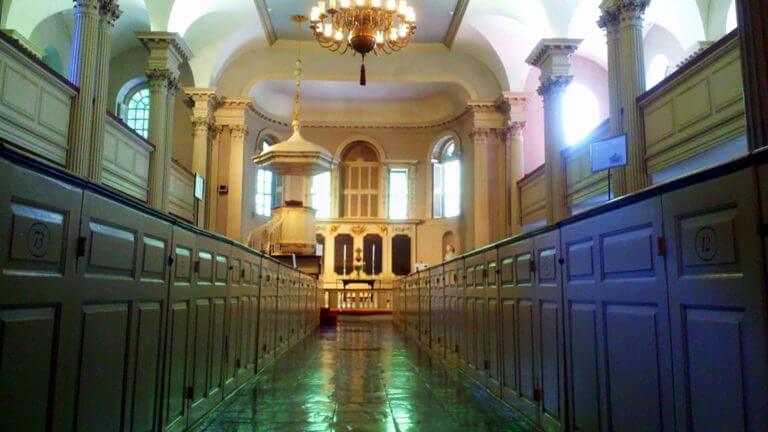 The power of love drives the spirit of the Lady in Black. Built in the 1840s to guard Boston Harbor, Fort Warren is a granite fortress on George’s Island. During the Civil War, the bastion was used as a prison for Confederate soldiers and disloyal citizens. Its most famous prisoner was the vice president of the Confederacy, Alexander Hamilton Stephens. Union soldiers reported strange sightings of shadows and apparitions on the beach. There were so many that an order was posted that guards should even challenge the spirits in case one was proven to be a real person. Mrs. Lanier made the arduous journey from Georgia to the fort to free her husband from the penitentiary, which was renowned for its harsh treatment. During the escape attempt, a Union soldier knocked a pistol from her hand, which fired and killed her husband. She was convicted of being a spy and hung.

Mrs. Lanier’s spirit is said to wander the fort’s grounds in the black clothes in which she was buried, still seeking to free her husband from his imprisonment on the island.

Putting on a Show

Owned by Emerson College, the Cutler Majestic Theater is reputed to have moving chairs and unexplained power outages. Built in 1903, the theater is said to be inhabited by several ghosts, including the couple who watch performances from the balcony and a little girl who accepts small gifts. One of the oldest theaters in Boston, it contains the “Nightmare Room.” It is said that those who enter the space suffer feelings of claustrophobia and congestion and have difficulty breathing. An apparition of a former mayor of Boston still watches performances from the seat in which he died.

Every member of the Emerson College Drama Department who has worked at the theater has reported some form of paranormal activity like disembodied voices, cold spots and the image of a man walking in the Theater Grid.

With its long history marked by tragedy and violence, Boston is one of the most haunted cities in America. These ghoulish urban legends are all part of the action when visiting these fascinating places of paranormal activity on a Ghosts & Gravestones Boston tour.