With a history steeped in pirates, Indians, shipwrecks and buried treasure, it’s no wonder Key West has its share of haunted tales. Visitors to the southernmost city often spend some time seeking out the tiny island’s spookier spots hoping to have a paranormal encounter.

More of a possessed toy than a ghost

Robert the Doll is by far the most infamous supernatural resident in Key West.

Robert, a childhood toy of a local artist named Eugene Robert Otto, was given to him when he was a young boy by one of the servants that worked for his parents. The doll went everywhere with Gene and strange things occurred when the two were together. Often, when Gene got into trouble, he would say “Robert did it.” This seemed innocent enough until one day Gene’s parents heard their son screaming from inside his room. When they got to the door, it was locked and they could hear a commotion going on inside. Gene was crying and screaming for help and when they finally got the door open, they found their son cowering in a corner – his room a total mess, items were thrown all over, and furniture was overturned. 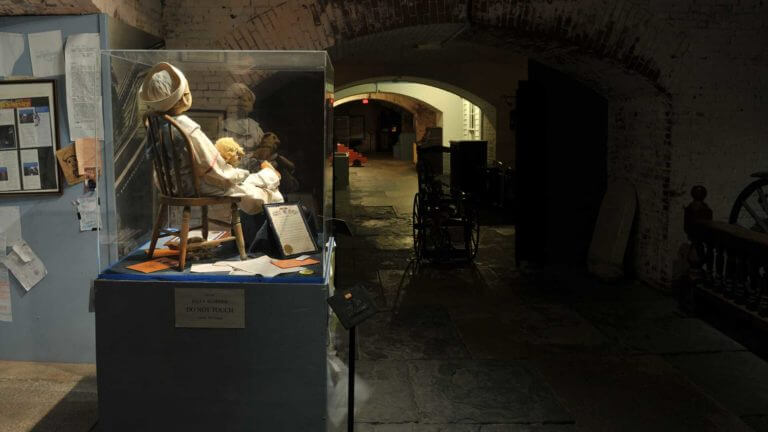 Other instances similar to this one continued to happen and often people would hear Gene talking to Robert and Robert answering him back – two different voices were having conversations.

Gene’s parents finally took Robert away – but years later, Gene retrieved his beloved friend and kept him throughout his adulthood. That is, until Gene’s wife had him secluded to the attic. Of course, this didn’t stop Robert who could be seen in different windows throughout the house. Today, visitors from all over are freaked out by the fact that when they try to get a picture of Robert, their cameras mysteriously malfunction. It is also perplexing when Robert, who now resides inside a glass display case at the East Martello Fort, consistently changes his position.

It is no secret that Ernest Hemingway loved Key West.

And for fans of the legendary author, a visit to Key West is not complete without a stop at his house which is now a museum. But many who visit, they see more than Hemingway’s lovely Key West mansion and descendants of his famous six-toed cats. For it is believed that Hemingway himself still lives in the house on Whitehead Street. He’s been spotted sitting at his desk, standing in the windows, and some even say they could hear the sound of him typing on his typewriter. Others have also spotted his wife, Pauline, in the garden and just outside the gate smoking cigarettes.

Photo: Ernest Hemingway and others pose with a shark. Courtesy of John F. Kennedy Presidential Library. 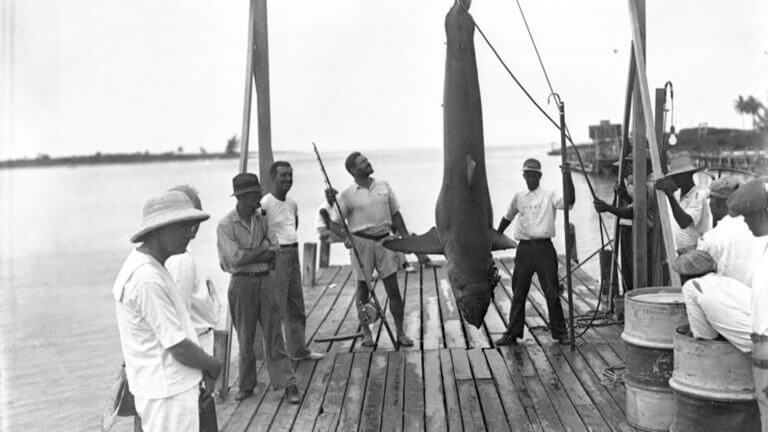 If you’ve ever visited the well-known Key West watering hole, Captain Tony’s Saloon, you may have heard of the Lady in Blue. She’s the most infamous ghost of this legendary bar which has been known to host many spirits. It may be due to its history which includes being used as a morgue and a site for hangings. In fact, the tree that was used for the executions still lives inside the bar, growing right through the roof. The Lady in Blue makes regular appearances at Captain Tony’s – the site where she was lynched and hung for brutally murdering her husband and two young sons. They hung her in the dress she was wearing when she did the evil deed and today you may catch a bluish glimpse of her as she roams the bar.

Serious about her self-appointed position, the Bahamian Guardian lurks about in the ancient Key West cemetery, haunting unsuspecting visitors.

Her goal is to ensure guests are respectful of the thousands of lost souls that are laid to rest. There are more than 75,000 people buried here – many of who died painful, tragic deaths. The Guardian is a Bahamian woman who has appeared to many visitors as they strolled through the graveyard. Whether they were sitting on gravestones, walking over headstones or just appearing disrespectful in any way, the Guardian will not allow it. She’s been known to whisper scolding remarks and even to threaten those whose behavior warranted it.

If you have time, take the Ghosts & Gravestones Tour for a chilling experience of walking amongst the dead at night – the most opportune time to have a ghostly experience.